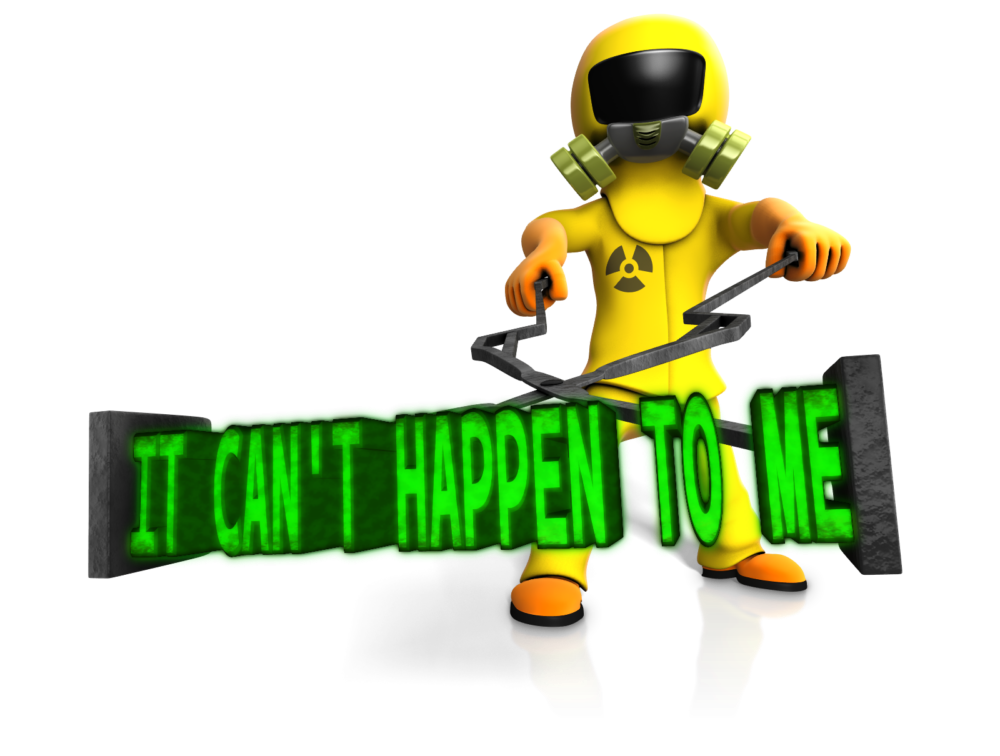 It Can’t Happen to Me

This behavior of “it can’t happen to me” is universal, isn’t it? After all, we have all done it. We have all ignored that gut feeling or just outright said in impatience, frustration, or defiance “it won’t (can’t) happen to me”. This “it can’t happen it me” attitude is quite simply a refusal to address a hazard. By dismissing the hazard also states they see and understand there is a hazard. The issue is not if they see the hazard but instead why do they willingly choose to do nothing about the hazard! It is literally like an ostrich defense mechanism putting its head in the sand to avoid risk – but does this really avoid risk?

It Has Happened to You

Not only can it happen to you, but it has already happened to you. Who has not fallen while walking or while riding a bike, spent a night in a hospital, been in a car accident, bumped their head, stubbed their toe, or walked into a wall? These are all simplistic examples of how readily and often harm can, and does, happen. In fact, it happens so often that most hospitals are full of the patients who are being treated for preventable sicknesses and injuries.

If it can happen and has happened to you, why is it we think it cannot happen again or at all? Wouldn’t all those bumps, bruises, stitches, breaks, burns and hospital stays have taught us it is worth the effort to prevent it from happening again?

The “it can’t happen to me” attitude stems from a perception when workers are asked to follow a process or procedure, they do not believe in. It shows in their frustration, anger, or outright defying policies and procedures. They feel safety slows them down or wastes their time, they are sufficiently protecting themselves, they do not need or want help, it makes them feel weak or vulnerable and a myriad of other reasons. Whether their reasoning is factual or perceived, to them it is real.

The greatest difference between “it can’t happen to me” and “it can happen to me” is the worker seeing the hazard versus the worker seeing and controlling the hazard. Observation alone does nothing to controlling a hazard. After all, the goal in safety is to have workers observe, assess, and control hazards. This hazard identification cycle needs to be complete to properly addressed hazards.

There are many books written on behaviors that would address this. A good start would be to look at Reactance and Vulnerable-Based Trust.

Reactance is a behavior that occurs when people are made, or perceived to be made, to do something. When this occurs, as the name reactance suggests, they react with defiance. Like when workers pushback on the safety rules and procedures because the company told them they must follow these new safety processes.

Both reactance and vulnerable-based trust have similar solutions. They require involving the worker in the creation of the process or procedure. When worker’s thoughts are expressed and heard they feel included. Instead of being made to do something they are apart of what is being done. This will reduce the likelihood of reactance.

Involving the workers will also cause you to spend time with your staff where you normally would not have. Spending time with people is the only way to develop relationships. Developing relationship is key to creating vulnerable-based trust as they see firsthand leaderships motivation is genuine.

You do not have to involve all workers when creating a policy or procedure. Identify the workers that others look up too and the workers most likely to show reactance and involve them. These workers have already gained that vulnerable-based trust with the other workers. By getting these few workers to believe in the process it will have a positive affect to the many workers believing in the process.

I Wil Not Let It Happen to Me

Addressing these behaviors will also create a positive workplace atmosphere people want to work at and be apart of. It will take time as worker’s go from simply seeing a hazard and saying, “it can’t happen to me” to seeing and control a hazard because “it can happen to me”. Ultimately this will lead to a new and improved behavior being “I will not let it happen to me”!

Behaviors such as reactance and vulnerable-based trust are complex topics that cannot be fully discussed within one blog. Subscribe to my blogs and Safety Minute YouTube videos for more content on understanding and communicating to behaviors.