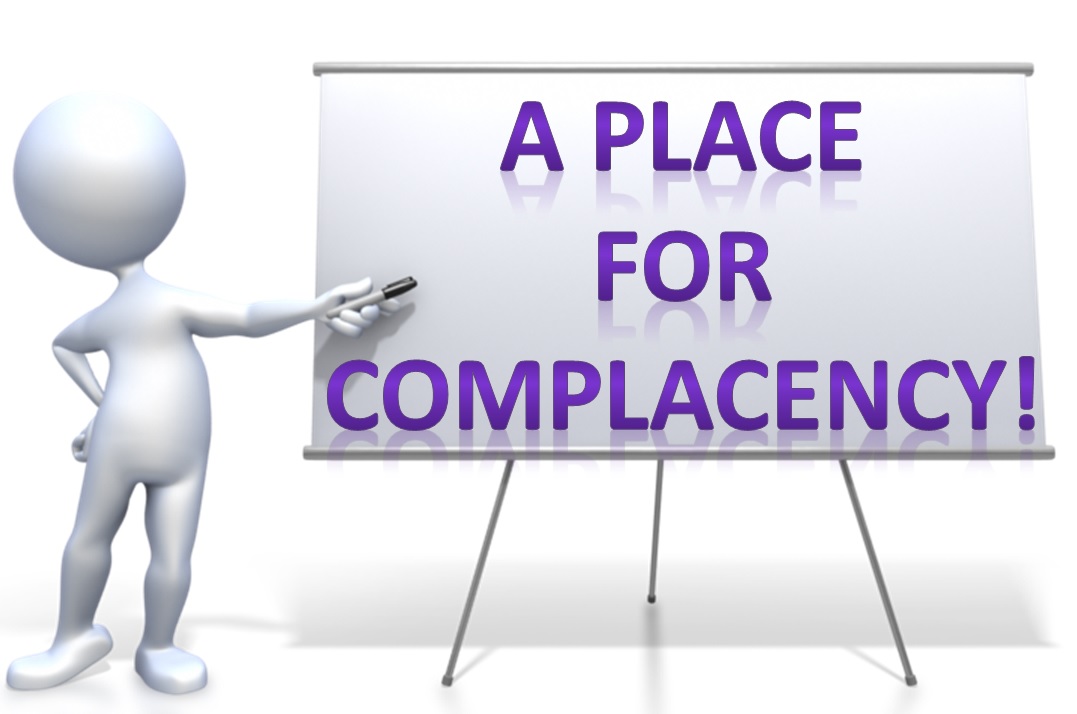 You may be scratching your head while wondering “how can anyone claim there is a place for complacency?”

It is prudent to note that the traditional definition of complacency and the way complacency is communicated in safety do not align with each other. By definition complacency is “self-satisfaction, especially when accompanied by unawareness of actual dangers or deficiencies”.1

As I travel between a broad spectrum of industries, my interactions with professionals on complacency remain fairly consistent. They all say it is a big factor they are struggling with and share statements like “they grew complacent” or “they became complacent”. When I hear those statement’s I question “how can an organization be unaware of the dangers or deficiencies of that industry? How can someone ‘grow’ or ‘become’ unaware of the danger or deficiency they once knew were real?”

If complacency is used differently by industry leaders than its definition states; what then is complacency? By listening how these leaders use the term complacency and describe it as ‘a big factor they are struggling with’ and that ‘people grow or become complacent’, it appears complacency is more about when a person conscious behavior defaults into a subconscious habit that has becoming accustomed to a task and the hazards associated with that task. These habits are producing unwanted actions that bypass or ignore hazards. This seemingly lack of awareness from the observer equate to the ‘big factors’ organizations struggle with. These habits are something we’ve learn over time and then they ‘grew into’ or ‘became’ our standard operating methods; whether the company condones it or not.

With the understanding that complacency is not a state of awareness or unawareness but instead a habit that accepts risk around an accustomed task; it is good news as tools can be designed to address habits and thus address complacency.

As I write this blog it is the first snow fall of the year. Because the weather changed so did driving habits. This morning traffic was much slower, distances between vehicles increased and people prepared to stop at intersections whether the light was preparing to turn yellow or not. If the light turned yellow people slowed down and stopped, signal lights were used, drivers were more courteous and patient with other drivers and there were zero accidents to report.

The normal behavior with traffic is much different. A large percentage of people do 10% or more of the speed limit. Drivers weave in and out of traffic trying to be faster than the rest of the other drivers. Letting other drivers in front of you decreases. Yellow lights no longer mean “clear the intersection” but instead mean “speed up and get through the intersection”. This “normal” behavior is the true reflection of our habits which have been trained from conscious repetitive actions that have become accustomed to the hazards of driving based on risk and reward outcomes.2

It is not humanly possible for conscious behavior to be the only means in which a person performs a task. If we always performed tasks with a conscious behavior our minds would overload by continual stress on the brain. Conscious acts are something we use when learning a new task, there’s a change in the normal routine, or when risk is perceived to increase. In these instances, we need our consciousness to perform computations so the proper actions can be assessed and then initiated.

The answer is – it depends on what the habit is programmed to do? When you drive with a subconscious habit do you regularly speed at 10% over the speed limit? If so, the complacent act is performing an unsafe habit which was previously trained from a conscious and intentional act. When you jump into the car do you immediately put on the seat belt without thinking about it? If so, this is a sub-conscious habit performing a trained conscious act. Both acts are based on the same risk and reward outcomes yet one act is unsafe and the other is safe.

By this understanding, a sub-conscious habit can perform wanted and safe actions. It’s a matter of programming the subconscious habit by engaging the consciousness effectively when learning and performing the task. This allows for the proper mitigation of hazards even when the task has become routine and the worker has become accustomed to the hazards!

Have you ever heard this statistic? It takes between 18 and 254 days for people to perform a task into a new habit?4 This statistic shows how habits are formed but it uses a large discrepancy between repetitious actions on when that habit is actually formed. When it’s understood why this discrepancy of 18 to 254 days of repeated actions exists, this statistic makes sense and can now be used to help us in how we train the subconscious habits of ourselves and others.

What this statistic is saying is:

Just like with a computer, the brain first needs to uninstall the old programming before it can install the new programming. This simply takes more time and effort. Hence, experienced workers may take more time to train then new workers!

Training subconscious habits is very possible and comes down to ensuring the task is performed in the manner desired over and over and over again until the habit is trained. You cannot create a subconscious habit by simply providing instruction once and hoping workers do as told. The research also shows it’s okay if we mess up occasionally when training the new habit. An odd deviation does not extend the amount of time required to form the new habit.

Training subconscious habits starts with training the foremen and women who oversee the workers daily operations. These foremen and women must be trained to engage the worker regularly to impact the desired conscious act. This engagement must occur at all phases of the task from the first training session, in the morning toolbox meeting, when the task is being performed and after the task has been completed and the review is undertaken. These multi-levels of engagement will help to train the new habit faster and with better results. This is also where a mentorship program in your organization can greatly decrease the time required for a new worker to become a part of your organizations culture.

The consciousness must also understand the benefit of why the task is being performed. If the worker does not perceive a tangible benefit to the new procedure the sub–consciousness will revert back to the old habit as a means of preserving energy!

Complacency is simply a trained conscious habit the sub-consciousness has become accustomed too. These habits are trained by intentional repetitive conscious acts. The goal is to training the subconscious habit to performing the desired act as if the conscious mind was performing the task. Training this habit is done by continual engagement of the worker at all levels of the task. This continual engagement and review will ensure the desired actions are done the same way with either conscious acts or subconscious habits. Sometimes the training must include a period to uninstall old programming in the brain before new programming can be installed. This takes a greater commitment of time, energy and patience but is very possible to achieving. By showing the benefit of this new task the conscious mind can be engaged to reward outcomes. This reward outcome interacts with the subconscious habit to desire the new programming and allows it to occur.

When this process is complete your organization will still have complacency. It just will no longer be habits you are fighting to prevent but habits you are training to create. Before you know it, the subconscious habit will be performing trained acts the organization desires that are so finely tuned into the routine the worker will not even be aware they are performing these acts. Like buckling up when you enter the car.

If you enjoyed this blog and would like to be informed when new blogs are posted, please go to the bottom of the main blog age on the website and subscribe to the blogs.